“McMI5”: THE SCOTTISH REFERENDUM AND THE INTELLIGENCE AGENCY THAT NEVER WAS

Posted on September 29, 2014 by Christopher Moran

The Scottish referendum is over. Last week, the Scottish people rejected the opportunity to become a new, separate and independent state, opting instead to remain part of the United Kingdom. It is nevertheless interesting to ponder what might have been had the “Yes” vote succeeded. One issue that would have required immediate attention would have been national security and the setting up of a Scottish intelligence service. What would such an agency have looked like? Most importantly, would it have kept Scotland safe? 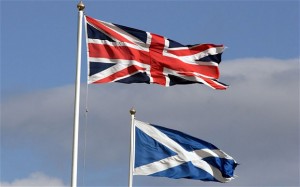 Plans had, in fact, already been put in place in the event of a transfer of power. In November 2013 the Scottish government issued a White Paper proposing a single security and intelligence service. It is interesting to note, therefore, that the Scots had decided not to have separate domestic and foreign services, à la MI5 (the Security Service) and MI6 (the Secret Intelligence Service).

The White Paper optimistically declared that intelligence functions would begin from ‘day one of independence’, although also acknowledged that there would be a breaking-in period of 18 months, also optimistic, in which time a raft of significant issues would have to be resolved.

For starters, the agency would need to recruit a competent workforce. In the short term, it might have relied on MI5 and MI6 officers hopping across the border on transfer or secondment – provided, of course, securocrats in London could stomach helping their noisy neighbours from the north. Longer term, it may have looked to recruit the best and brightest from leading Scottish universities, such as St. Andrews, the alma mater of Prince William and Kate Middleton.

A new agency would have needed legislative frameworks, defining not only its powers and responsibilities, but the structures and processes of accountability and oversight. Scotland, like every nation, would need to decide where to draw the line between civil liberties and security.

While it might be argued that an independent Scotland would not have confronted the range and severity of threats encountered by the United Kingdom, it is hard to escape the conclusion that, in the short term at least, the Scots would have found themselves in a vulnerable position. Intelligence agencies are not built overnight. As a former head of MI6 (Sir John Scarlett) reminded voters in the run up to the referendum, Britain’s highly-sophisticated intelligence machinery had matured over many decades and ‘simply cannot be replicated in just a few years’.

There would have been no guarantee that Scotland would have had access to the UK’s intelligence product, including vital information acquired as a result of the “Five Eyes” Agreement with the United States, Australia, Canada and New Zealand. As UK Home Secretary Theresa May emphasised in a 2013 speech, as a new country, Scotland would have to earn the trust of the UK and “Five Eyes” intelligence community before it could expect to receive sensitive information. In short, Intelligence liaison with other countries would have hinged on Scotland’s ability to convince potential allies that it could keep secrets.

Budgetary constraints would also have hamstrung the Scots. The aforementioned White Paper put aside an annual budget of £200m ($320m). To put that into context, the avowed budget of MI5 is £2bn ($3.2bn); documents released by Edward Snowden suggest that the CIA’s budget stands at nearly $15bn. The UK government is presently injecting an additional £210m ($344m) to upgrade a cross-government National Cyber Security Programme, building on an earlier investment of £650m ($1.05bn) to ensure that the UK is protected against cyber-attacks. Of course, budgets alone do not make a nation safe; but they certainly help and it might be argued that the Scots had underestimated the costs involved.

In the end, however, the “No” vote was defeated and the status quo prevailed. MI5 and MI6, not to mention GCHQ, will continue to provide for Scottish security under the umbrella of a unified kingdom. “McMI5”, as critics dubbed it, is an intelligence agency that never was.