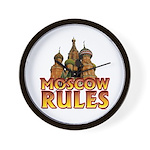 The Cold War may be over, but much like “Rules of Engagement” for spies, the Moscow Rules still serve as prominent guidelines today. Developed by the CIA, the Moscow Rules was an ode to the dangerous locale that Moscow was during the Cold War for clandestine operatives.

The original list were said to have contained 40 different rules, and may never have existed in written form; former agent Tony Mendez wrote “Although no one had written them down, they were the precepts we all understood … By the time they got to Moscow, everyone knew these rules. They were dead simple and full of common sense…”.

Share with us – what are some of your favorites from this list? Would you consider using The Moscow Rules in your daily life?