Good morning, agents. Before you head into the field, it’s imperative that you review the following documents as assigned by our resident spy, Peter Earnest. This list represents a comprehensive guide to trade craft and past missions that will help you on your future assignments.

1. The Agency: the Rise and Decline of the CIA by John Ranelagh

This is a comprehensive look at the history of the CIA. Inside you’ll find stories on its dealings with presidents, Congress, and the KGB. Ranelagh also addresses pivotal moments in the Agency’s history, many of which occurred during the Cold War. We recommend our agents read this book to gain a better understanding of the CIA’s past and the events that shaped it into one of the most powerful intelligence organizations in the world.

2. For the President’s Eyes Only by Christopher Andrew 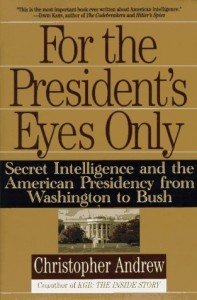 For the President’s Eyes Only…till now.

This book presents a deep analysis of the relationship between each American president and his respective I.C. It outlines not only the change of administrations, but also their effects on the intelligence services during the transitions. Every agent needs to understand proper protocol when presenting classified information to the Commander in Chief.

This could serve as the go-to textbook on espionage trade craft.  Inside you’ll find briefings on US counterintelligence and covert actions. Easy enough for new agents to understand, this broad overview of intel practices will appeal to experienced operatives, also.

4. Spies: The Rise and Fall of the KGB in America by Haynes, Klehr, Vassiliev

New recruits should undertake this reading as part of their training against the KGB – it outlines the notes of Russian journalist Alexander Vassiliev, who had access to their operational files during the 1930s and 1940s. This book of biographical sketches gives an intimate look into the hearts and minds of US agents’ Russian counterparts.

5. A Spy for All Seasons by Duane Claridge

This piece will give fledgling agents a look at what a long-term career in the Agency will resemble. Claridge embarked on 30-year journey at the Agency where he oversaw important events such as the Iran-Contra affair and the creation of the Counterterrorism Center (CTC).

6. The Art of Intelligence by Henry Crumpton

This modern account of Henry Crumpton’s career in the CIA, especially his time spent in Afghanistan, illustrates a spy’s job in today’s context. The Art of Intelligence uses Crumpton’s experience to illustrate the importance of efficient counterintelligence officers. After reading this, agents will understand the importance of building strong relationships with their sources.

What’s a spy without his gadgets? Gadgets, whether they are hi-tech or lo-tech, are vital to accomplishing any covert operation. Spycraft takes a look at the different devices and techniques that have aided espionage throughout the centuries and continue to assist agents in completing their assignments worldwide.

The fancy car finally caught up to him.

Every intelligence agency fears being breached. Nightmover chronicles the case of Aldrich Ames, one of the deadliest moles in history, as he divulged sensitive information to the KGB that led to the deaths of numerous CIA sources. This case study is a must read for all agents – both a lesson and a warning.

9. The Spy Who Saved the World by Jerold Schechter

This book is for anyone who underestimates the importance of intelligence. The Cuban Missile Crisis was one of the tensest moments of the Cold War, and the outcome could have been very different if Co. Penkovsky, subject of The Spy Who Saved the World, had not shared critical technical information about the Soviet missile program. Close call.

10. A Secret Life: The Polish Officer, His Covert Mission, and the Price He Paid to Save His Country by Ben Weiser

No espionage crash-course is complete without a human interest story. Weiser’s account of Polish colonel Ryszard Kuklinski, who betrayed the Soviet-controlled Polish government to the CIA in 1981, outlines not only Kuklinski’s life of subterfuge but raises the question of whether he was a traitor or a patriot.

Reading these books is the next step to becoming an expert operative and celebrating our 10th anniversary (intel indicates there might be cupcakes on the 19th).

That’s all for now, agents. More intel to follow. Over and out.

Also, be sure to check out our Spy Store to see if any of these titles are available.

2 Responses to Top Ten Spy Books According to Our Resident Spy, Peter Earnest